XP, SSL, and WebDAV – these don’t play together well

On a SharePoint 2007 site, users were complaining that when they opened a library in Explorer view, they did not see a full menu and could not perform all the functions they needed to – like sending files to a compressed folder. I could not re-create the problem but several users complained about the same thing and sent me screen prints so I knew there was something going on, at least from their end.

Why could I not re-create the problem? The only difference is that my operating system is Windows 7. Those reporting the issue (and, in fact, most of the employees in the entire company) use Windows XP. As I delved into the issue, I learned some interesting things about the Explorer view. It’s not as simple as it looks. And there are actually two different protocols, each of which has a different level of functionality.

WebDAV (Web Distributed Authoring and Versioning) – WebDAV is based on a public standard for authoring and versioning via HTTP. The WebDAV client support is the Web Client Service which is a Windows network provider. For this reason, the look and feel of the WebDAV Explorer view is similar to what users see when using Windows Explorer to navigate their computers and network drives. When I was accessing the site from my Windows 7 PC, I got the WebDAV view: 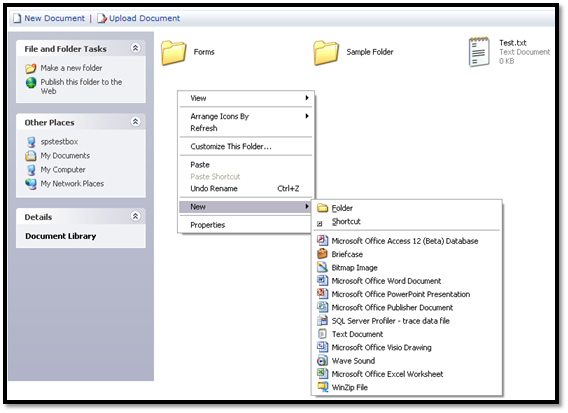 FPRPC (Front Page Remote Procedure Call) – This is a Microsoft technology that was developed for value-added FrontPage capabilities. Unlike WebDAV, the FPRPC protocol does not use the Web Client Service – it uses WebFolders. WebFolders is not a Windows network provider and because of this, it has some limitations and the icons and context menus do not match those of Windows Explorer. This also means some of the functionality is lost. When users were accessing the SharePoint 2007 site, they were getting the FPRPC view: 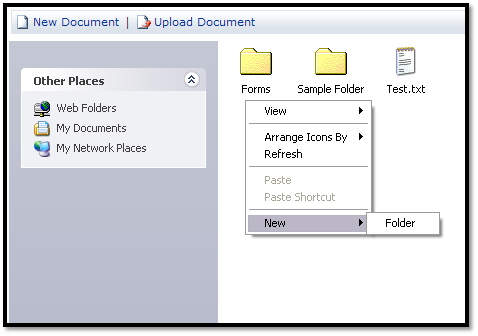 Could we "force" the WebDAV view to be used instead of the FPRPC view for the users? After researching the SharePoint Explorer View and even inquiring on the Microsoft partner forums, the answer was no. Why? Because the SharePoint 2007 site was encrypted on port 443 (SSL) and the WebDAV protocol does not work on ports other than 80 if you are accessing the site using Windows XP or Windows 2003. This behavior is by design and there is no workaround. The solution is to move the site to port 80 (not always an option) or upgrade to Windows 7 since Win7 does not have this limitation.