I have been a Windows Media Center user for a while as can be easily seen from the variety of blog posts which I have written on this topic (as shown below):

Recently I found that no programs were scheduled for recording on my Media PC. This is pretty much unheard of in my household so this started ringing some alarm bells. With some debugging I found that the television guide was not updating correctly for my over antenna signals. The issue was easy to see when opening the guide which looked a lot like the screenshot below.

From this article (http://www.thedigitalmediazone.com/2015/07/08/microsoft-breathes-new-life-into-media-center-guide/) we can see that Electronic Program Guide (EPG) data was converted from Zap2It to Rovi. This conversion appears to have been the cause of having no television guide information available in Windows Media Center after July 20th 2015 for several zip codes (at least). 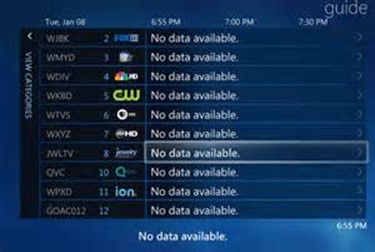 I went through a variety of debug steps which did not resolve the issue. These included:

I recommend avoiding the tasks above if you media center system is currently working but is just missing the guide data.

I found an existing discussion on this topic at https://connect.microsoft.com/site1145/Feedback/Details/1573972. From discussions on this thread and recommendations from ewtaylo1 (huge thanks!) I was able to put together a workaround which works for my system and from feedback I’ve received in twitter it appears to be working on other systems. This blog post will provide the steps that I used for this workaround and suggestions for this issue going forward.

The steps which I took to work around this issue are as follows: 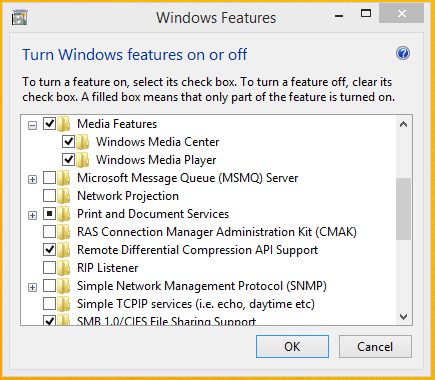 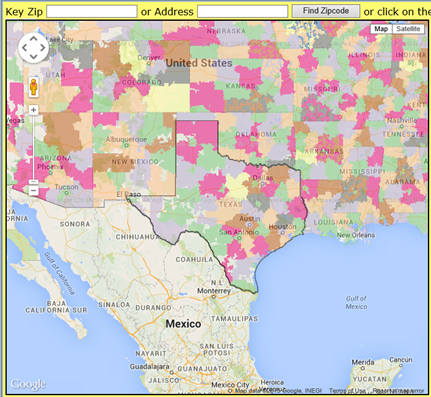 You can put in your own zip code and find others around you. As an example if you live in Houston:

UPDATE: I have gathered all of the valid zip code information which I’ve been able to find online and combined it at: https://onedrive.live.com/redir?resid=42E09579CA8AEAC0%2152294

A failure to get data for the zip code you entered will show up with an error like the one shown below. Do not continue past this step, go back and try another local zip code. 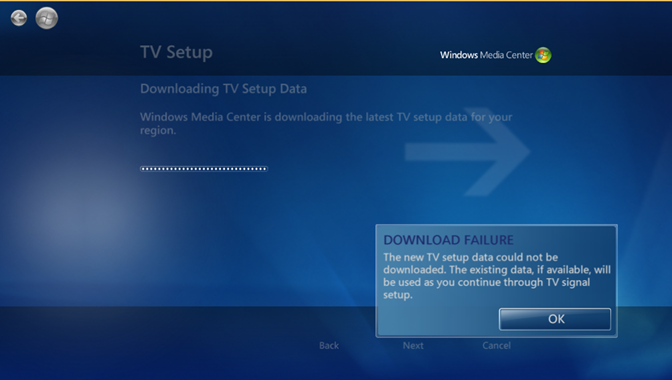 To determine if the zip code you entered is working refer to the underlying log file available in c:programdatamicrosoftehomelogsFirstRun.log.

A sample failure from the logfile is shown below:

A sample success from the logfile is shown below:

Once I found a working zip code the media center application continued with TV signal detection. 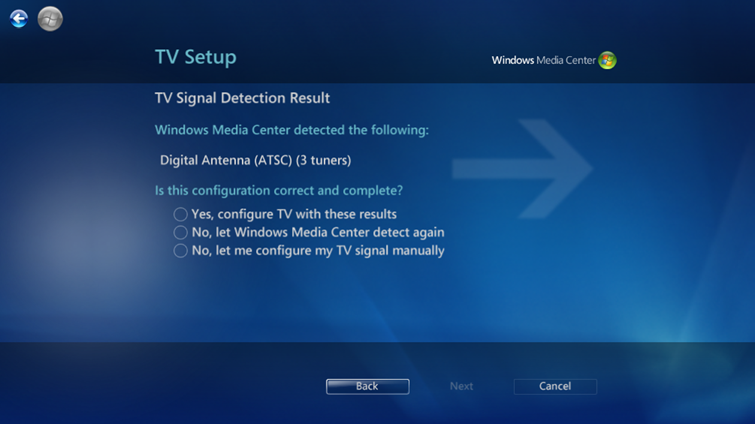 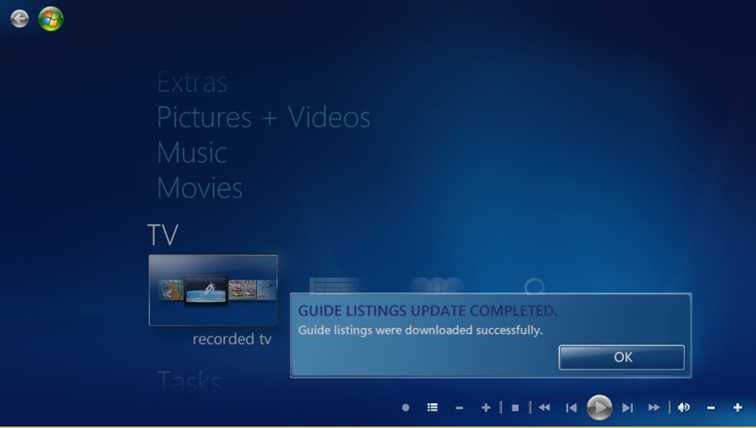 A successful update to the guide was able to be show that the data was successfully being gathered from Rovi as shown below.

And a successfully populated guide is the final step in validating that the new guide is now functioning correctly. 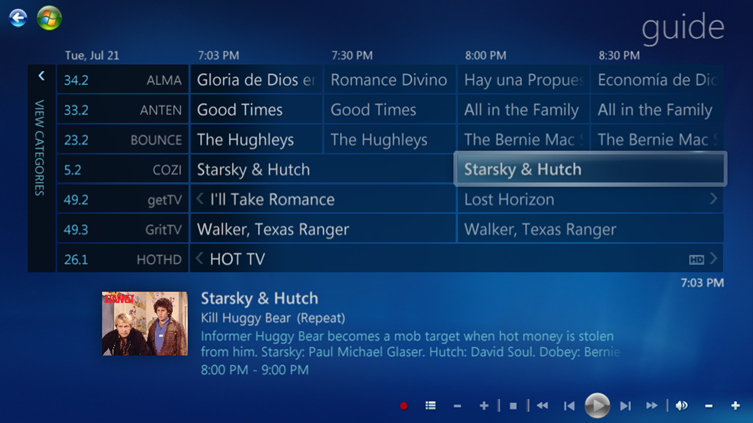 Summary: In my environment I was able to work around the issue by trying a variety of local zip codes until one of them would populate the television guide data correctly.

Suggestions: For Microsoft on this issue going forward it’s critical to the user community that the guide data is available for all locations. In the interim, having a list of acceptable zip codes would be a huge assistance for other people in the community who are running into this issue.

UPDATE: 7/30/2015: If the instructions above do not work for you, see the comments from Marcus and Willow below for a second approach which is reporting success. A subset of their comments are listed below and were provided by a forum on TheGreenButton:

Make sure to close WMC

– Click Start > All Programs > Accessories.
-Right-click Notepad and select Run as administrator.
-Click Continue on the Windows needs your permission UAC window.
-When Notepad opens, click File > Open.
-In the File name field, type C:WindowsSystem32Driversetchosts.
-Click Open.
-Replace the IP address at the bottom of file with:
65.55.186.113 data.tvdownload.microsoft.com
72.246.56.59 cdn.epg.tvdownload.microsoft.com
-Click File > Save to save your changes.

Last step is to run “Set Up TV Signal” from the WMC settings menu. After running the set up it should take 3-5 mins for the guide to update.

Discussion on and feedback is available at: https://connect.microsoft.com/site1145/Feedback (this information came from http://www.thegreenbutton.tv/forums/viewtopic.php?f=30&t=8983).

A subset from that post is listed below for your reference:

“As you may have guessed, there are a lot of people reporting issues on the Connect site – so many, we’re unable to respond to each of them individually. I want to assure you all that we are working on those issues, however. Daily, we are gathering all the issues reported, collating them by issue type, and following up on them as a group.

We look at each issue report of missing data for specific zip codes and providers to clean up the data feeds. So far, we have resolved a large number of data quality issues, addressed the series recording issues (if not, let us know!), and are working on the cable card issues currently.

We are continuing to work on this issue on our end, and greatly appreciate the help and support of the community in reporting issues and sharing info.”

1) This does appear to be happening to multiple systems

I will update with any resolutions that I find here. If you are having this issue as well, please log it to: https://connect.microsoft.com/site1145/Feedback/Details/2452803

3/16/2016 update: I have received reports that the guide is now updating correctly and in my environment it now has program data until the 29th so this issue appears to be resolved now.

1) This does appear to be happening again to multiple systems as multiple people have reported this in their comments and I am seeing it as well.

I will update with any resolutions that I find here. If you are having this issue as well, please log it to the following URL if you can get to the site: https://connect.microsoft.com/site1145/Feedback/Details/2452803. I have also sent a message to Rovi via their twitter handle and am waiting for a reply.