Windows Phone to iPhone Week 1 In the Books

So, its been a week since I made the switch and today I wanted to talk about how Apple really caught up with Microsoft on ease of use as part of the OS.  One thing I really liked about my Windows Phone was the speed with which I could accomplish basic tasks because they were part of the OS and not an app that I have to find and then open.  This was best shown by the 2012 ad campaign that they did called Smoked by a Windows Phone

Over time this was less and less of an advantage and now, in my opinion, iOS is far superior to Windows Phone 10 in this area.  For example, iOS has a pop up menu that you can open by swiping up from the bottom of the screen.  It is similar to the menu that Windows Phone has on its notifications screen.  On this menu I can quickly flip on Airplane Mode, WiFi, Bluetooth, Do Not Disturb, and Rotation Lock.  You can do that on WP as well.  I can also easily set the brightness, see what is currently playing and control it, kick off AirPlay, and hit some quick apps (Flashlight, Alarms, NightShift, Calculator and the Camera.

One thing that we all do is share content with others.  It might be an email or an SMS message, or it might be on a social network.  On Windows Phone this was a bit clunky, but on iOS it is much simpler.  First off when you click on the share icon regardless of the App you get the AirDrop menu.  This lets you easily hit the app that you want to use to share the content as well as some common functions for the app you are in.  This is a web page so I see bookmarks, etc. 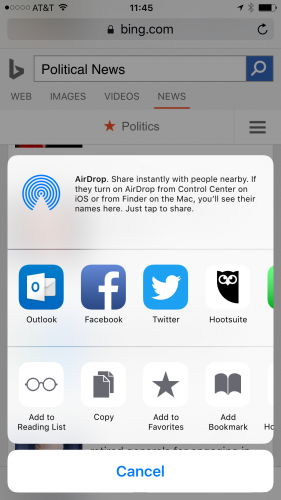 The Air Drop menu is for sharing content and the best part is that it is customizable.

The best part of that menu is that it is customizable.  If you swipe the list of apps to the left you will get to a More option and that takes you to this screen where you can select what apps you want on the AirDrop screen and the order of them.  This means that I can move the more common apps to the top to make it easier. 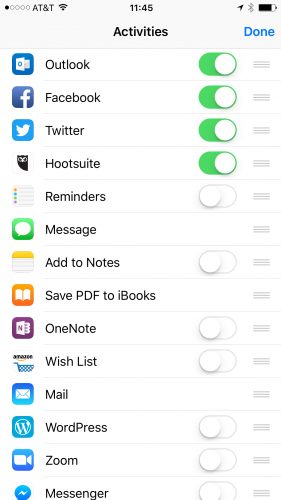 Easily customize what apps appear and their order