To provide this type of alerting we used the built in group for health service watchers shown below (Microsoft.SystemCenter.AgentWatchersGroup or Health Service Watcher Group):

The Computer Not Reachable monitor:

The Computer Not Reachable monitoring is an interesting one. This monitor performs a ping test on servers where the agent has failed to heartbeat (the default configuration in Operations Manager is three heartbeats executing every 60 seconds). The summary for the monitor explains it well: 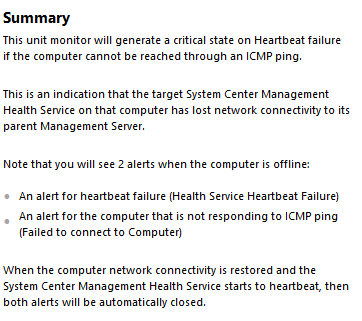 The monitor is shown below as part of the Health Service Watcher within Availability. 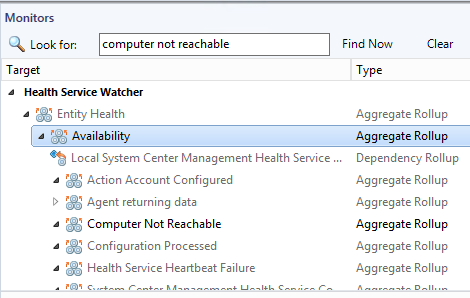 A sample output for this report is shown below:

Note that in the report above, it is reporting on the availability for the specific monitor (Computer Not Reachable) versus the health server watcher itself.

Summary: By directing the two different alerts generated by Operations Manager to two different groups we can have one group which focuses on when servers are completely non-responsive and another which focuses on working to get Operations Manager agents back online when failures occur. Also, by using the custom availability report shown above, we can easily report on available based upon when a server is able to be pinged instead of when the server agent is functional.