As part of the Operating System management packs, Operations Manager provides warning level alerts which impact the state of a server when drives on the server are heavily fragmented. For good discussions on these and history related to them please see the following articles:

I agree with the logic to making these monitors and that they impact the state of the server. The difficulty with this monitor is that it generates a lot of alerts and changes the health state of most of the servers in the environment to warning. As a result this is most often turned off to “blissfully ignore” these situations (well said Ian!). There are challenges with this monitor in terms of how this monitor works which I have included as a subset from an earlier post below:

“I would like to be able to enable this recovery for all servers in the environment (and exclude specific ones) however there are a few major challenges with this approach as of this version of the management pack:

As updates to the above information for the first point – defragmentation automatically stops itself after one hour so this does help to minimize the potential risk of impacting production systems. The second item above I will be discussing in this blog entry. The third and fourth items I still believe would be beneficial next steps for the management pack.

To reset the health states for these servers only for the logical disks, we created a batch file which contained the following:

Successful execution of the GreenMachine class level reset looks like the following: 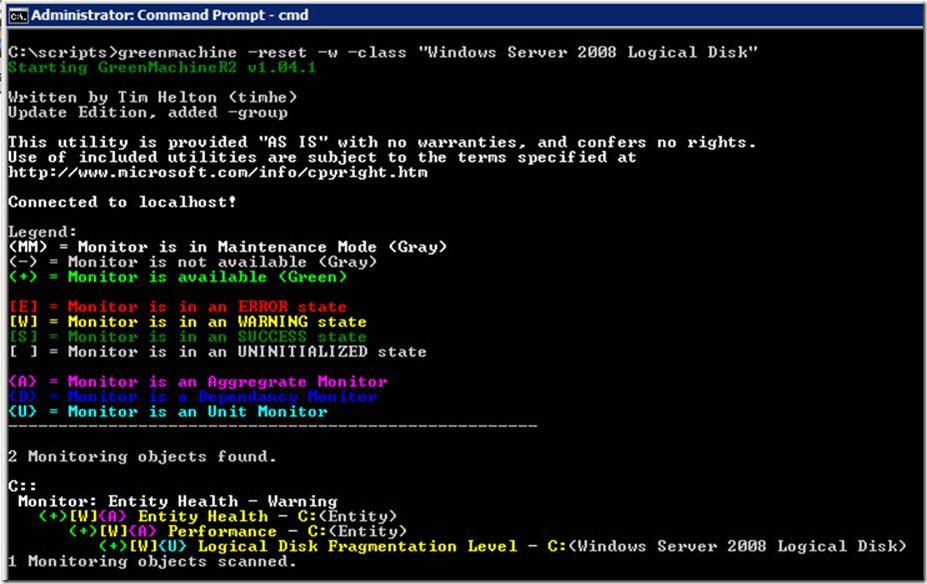 The batch script resets the health states for these warning conditions for the various types of Windows Server logical disks and when these are reset they automatically close the corresponding (Logical Disk Fragmentation level is High) alert. This batch file can then be scheduled to run daily (or once a week) after an automated recovery has occurred. If we put these all together we can develop an automated process that looks like this:

This process requires GreenMachineR2 v1.04.1 (which is available for download here) since it uses the –class option

Summary: Automating the defragmentation of drives in Operations Manager is viable with the right process!