There’s a lot of content and articles out there making fun of people using Facebook, Twitter, etc. incorrectly (what’s up, BuzzFeed, Shares From Your Aunt, and Cracked?) This isn’t going to be one of those articles. Yes, we’re now at the point in society where social networking is kind of a running joke, but at the heart of it, we wouldn’t have gotten here if value wasn’t being provided along the way. For those of you who are relatively new to this whole social thing, and even the wily vets who want to be a bit more introspective about what you’re getting out of it, here are a few things you should consider:

1. Starting your tweets with a user name as the subject

I’m just going to get this one out of the way because it’s something that’s still so commonly misunderstood. Have you ever wondered why some people will sometimes start a tweet with a period? 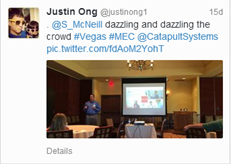 The reason for this is because Twitter is actually completely text-driven and is not context-aware, as some people might assume. What this means is that when you start a tweet just with a user’s name (ex. "@S_McNeill dazzling the crowd…") Twitter will actually treat it as a reply to that person instead of a public tweet, and the only people who will see the message are users who happen to follow both users.

Putting the period in front ensures that the tweet will go out to all of your followers instead of just the folks who follow both. If this is too awkward for you, you can simply just be creative and work the user name into the middle of your tweet instead (ex. "The crowd is dazzled by @S_McNeill’s MEC show.")

2. Talking only about professional topics 100% of the time

This is something I see a lot within the SharePoint community, specifically on Twitter, although the same should be said about your enterprise social network, like Yammer. A lot of folks use Twitter as a professional networking tool and aren’t comfortable sharing personal details publicly. They may say that they reserve that kind of stuff for Facebook.

But imagine instead if you had a coworker who only wanted to talk business. He or she kept private life completely private and never once mentioned any family, friends, hobbies, or other outside interests. Sure that person might be a competent coworker, and even a good team mate. But there is a lot lost when that is your only way to connect to people. Most of the time those personal connections need to be established first so that the professional relationship can be built on top of that.

Pretty much all the people in the SharePoint community that I’ve been lucky to connect with primarily from social networking came from the fact that we shared the same interest in running, cooking, sports, etc. Very few of them actually came from something specifically SharePoint-related.

Caveat: Of course there is also the need to be aware of oversharing. You definitely don’t want to overdo it, so try to just make sure that every post you make, even the personal ones, are at least somewhat interesting and relevant to your general follower population.

(Also, try to go easy on the shameless self-promotion.)

I think this one is particularly relevant these days in a world where privacy concerns are at the top of everyone’s mind. In my opinion, though, doing this really neuters a lot of what you can do in any of these applications. For example:

But probably the biggest limitation is that you are then only connecting with people who you’ve already met in real life, which completely defeats the point of social networking! Instead the better practice is just show a bit of discretion online. If you’re uncomfortable with something you post publicly coming back to bite you in the butt, you can probably stand to re-examine what you’re posting that you’re so concerned about.

4. Not understanding when to retweet and when to RT

If you are confused about the difference between the two, I don’t blame you. I admit, it’s subtle nuances like this that I’m sure drive a lot of people away from using Twitter to begin with.

Let’s dial the way-back-when machine just a little bit. Back in the day when someone posted something on Twitter that you liked or wanted your followers to see, you had to copy their text, and paste it into your own, adding "RT @theirusername" at the beginning to give credit to the original author.

Eventually Twitter created its own feature for this by adding the "retweet" button to its interface.

There are a few differences between the two that you should know about:

Not only does this in some ways take you out of the conversation, it can also have some unintended consequences. For example, I helped run the Twitter account for SharePoint Saturday in Austin back in 2013. I made sure throughout the day to tweet thanks to each of our sponsors.

The conference attendees also wanted to express their thanks but about half of them retweeted the post and half used RT. The thing is though: because of the way that Twitter works (specifically difference #2 above), sponsors were only notified when the attendees used the RT method. Retweets were practically kept hidden from them (they’d have to actually go click on the tweet to find everyone who retweeted them).

In my opinion when given the choice, you should always use the RT method, except in the following cases: 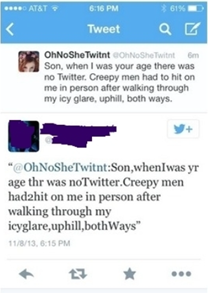 5. Not engaging with complete and total strangers (which is by far the most fun and biggest benefit to social networking)

It goes without saying that the most interesting part about this social network craze is that the people who you are following are ACTUALLY THE PEOPLE YOU ARE FOLLOWING. This includes most journalists, writers, thought leaders, CEOs, celebrities, and others (assuming they aren’t being ghostwritten by an intern). On top of that, odds are pretty good that if they’re truly active on these social networks, they are at least open to engaging with other folks out there who have something to say. The beauty of social networking is that you don’t need to take that person out for a drink, stop them in an elevator, or snoop around for their email address. It takes a few seconds for you to respond and a few seconds for them to read it, so the cost and risk is low for both parties. It truly not uncommon for complete and total strangers to engage in mini conversations that they would have never had in any other context.

Of course it goes without saying: BE POLITE AND RESPECTFUL. But in the future, if someone you follow but don’t know posts a question or a comment inviting response, don’t be so gunshy to join in on the conversation. You have nothing to lose and you may be surprised at the results.