Subscriptions do not fire for sub-groups members in OpsMgr (#SCOM, #SYSCTR) or DO they…

During a recent discussion on OpsMgr 2007 R2 environments, I was told that OpsMgr subscriptions do not fire for sub-group members. I decided to test this and see if this works the same way in OpsMgr 2012. To test this I created a total of three groups: A top level one called “Top Level Group” with no members. A second group called “Sub-Group1” with one computer object and a third computer group called “Sub-Group2” with a different computer object. Then I added the two sub-groups to the top level group which looks like this:

For this test, I used the Alert History addition blog that I had recently written. To test this, I created a new subscription which was targeted to all alerts which occurred for my “Top Level Group” and tested changes to a variety of alerts in OpsMgr to see if the subscription would fire correctly for the two entities I had put into the sub-groups. The new subscription looks like this: 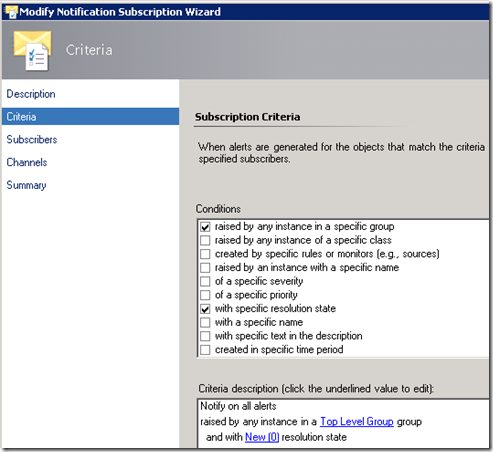 [As a side-note, don’t ever use the Alert History addition idea without setting a restriction on it to only “New” alerts as I accidentally set it to the group and not restricted as well to just new. The result was that the subscription started continually re-processing all alerts in the environment which spun up a whole lot of PowerShell scripts that really beat up my lab environment.]

I was pleasantly surprised to see that my test actually worked! For my subscription which was defined on the top level group, alerts were processing correctly through the subscription. See the example below where a ticket was generated in service manager and the history was added to the alert since it matched the condition. 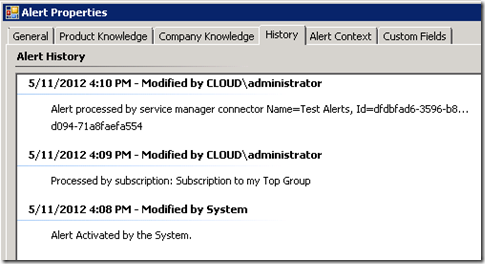 For OpsMgr 2012: It appears that subscriptions can be defined on top level groups and will include the members of the sub-groups in the subscription!