So, I am off to the Microsoft SharePoint Conference to learn all about SPS 2010 and hang out with some great SharePoint peeps. I will also be tweeting as much as possible during the conference. Initially I was planning on just using my iPhone for tweets as the laptop will never make it through a day and power figures to be at a premium.

Getting from San Antonio to Las Vegas is a two stage affair with a layover in Dallas. I don’t fly that often and was unpleasantly surprised to have to pay money to check my luggage. I think in the future I will be flying Southwest as they do not charge for checked baggage

I got into Vegas very late on Sunday night (about 11:45PM local time) and walking off the jetway I was surprised to see… 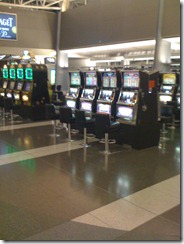 Slot machines in the airport. Yep, I was definitely in Vegas.

So there are something like 7900 attendees at this convention. The last convention that I attended with this kind of crowd was Dragon*Con in Atlanta many years ago. This one seems more crowded (I think because we are all trying to get to the same places). After a nice breakfast we all filtered into the main hall for the keynote address. I ended up in the fifth row off to the side a bit. In front of me was a huge screen that I ended up watching. It was like being in an IMAX presentation, but all about SharePoint. 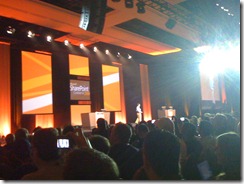 this was the view from my seat. It really is better then the photo shows. 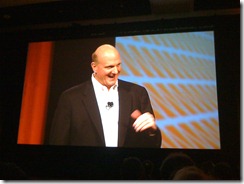 and here is Steve Balmer on the big screen in front of my seat. He was very high energy and fun to listen to. So, what did we learn?

Well, one thing that has become readily apparent from this convention is that Microsoft learned a ton from the roll out of MOSS 2007. The biggest thing they learned was that as great an improvement over SPS2003 that MOSS was, they did a terrible job of actually preparing the community for rolling out and using MOSS. They have built everything about SPS 2010 to fix that basic problem. How?

There was a ton more, and that was just the Keynote and the first session I attended. I also hit sessions on ECM and WCM. There I saw what might be the most powerful feature I have seen so far…but that post will have to wait as I am off to breakfast and a new day of SharePoint goodness.