I recently was working on a way to translate rules from MOM 2005 to OpsMgr 2007 without using the backward compatibility management pack. While the concept worked out well, I made a mistake in how I targeted these new rules. What I started seeing was that OpsMgr was generating alerts which were displaying an incorrect source. So that I had several rules which whenever they occurred they were reporting the same alert 6-10 times from different sources. What I found out was that I had made a mistake on these rules and had targeted them to Windows Local Application instead of Windows Server Operating System. So the first place I went with these was to try to re-target them from within the Operations Manager console only to find out that you cannot re-target rules once they have been created in the Operations Manager console. For a few rules this is not a big deal because I could just delete and re-create the rules in the OpsMgr console and point them to the correct target. However, with hundreds of rules this represents a big problem.

I did some lab work and found that I could open the management pack in the OpsMgr Authoring Console and I could re-target the rules within the authoring console! So here’s what I learned from this process:

I had another situation where this was useful for a custom monitor I created for the IIS management pack. I originally created a new monitor and I targeted it to the IIS Computer Group as enabled (instead of targeting it to Windows Server Operating System, disabled, enabled for the IIS Computer Group). Screenshots of how this was done for the monitor are showed below:

From the authoring console opened the IISOverrides from the RMS using the tools / import MP from Management Group function. 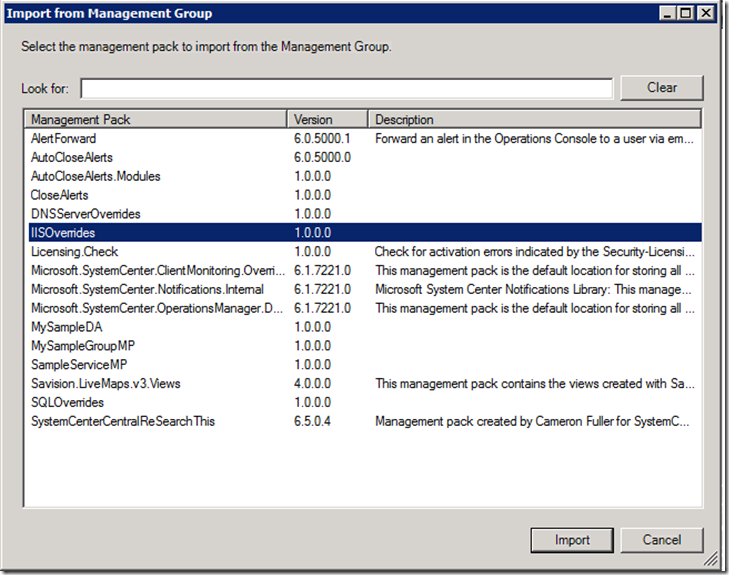 Located the monitor within the authoring console and changed it’s properties.

Identified that the general target was wrong, and chose the correct one. 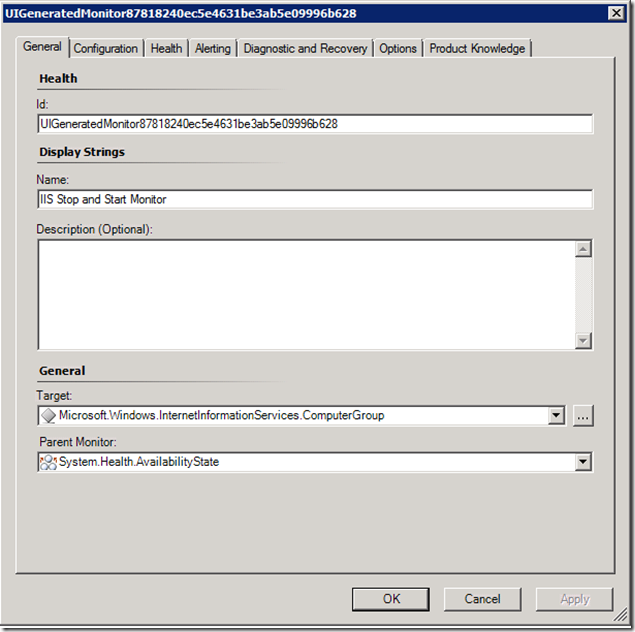 Changed the target to Microsoft.Windows.Server.OperatingSystem. 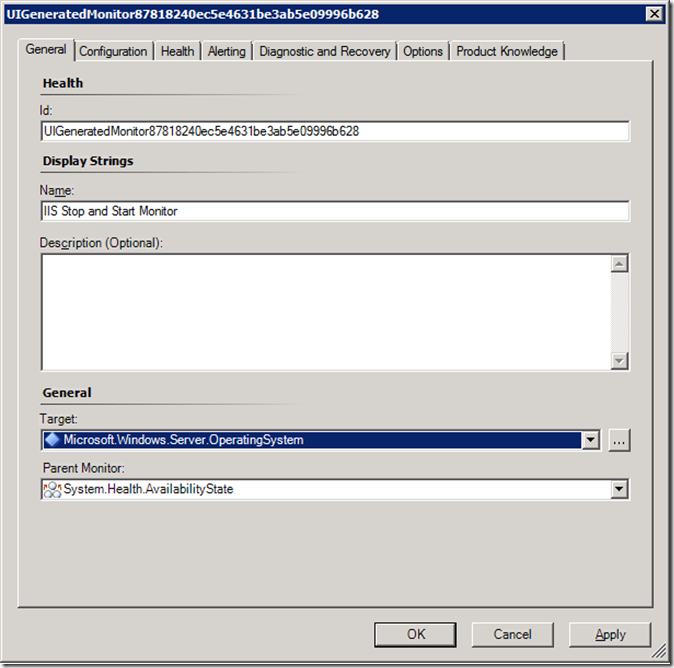 Set the options on the monitor so that it is not enabled (disabled by default). 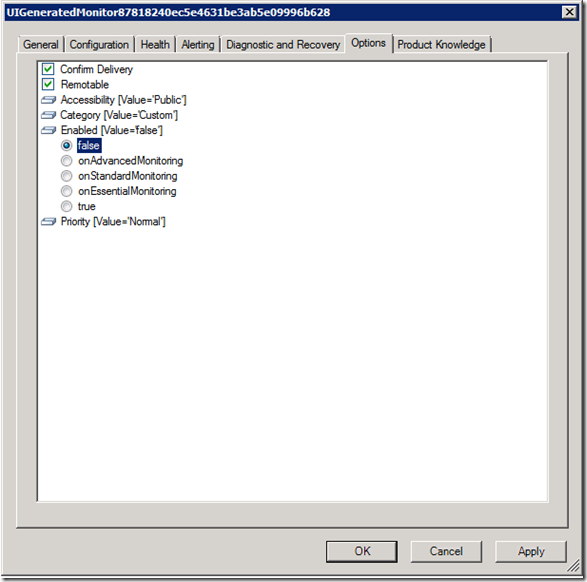 Use the tools / Export MP to Management Group. Verified that the monitor was now not enabled and had the correct target (Windows Server Operating System). 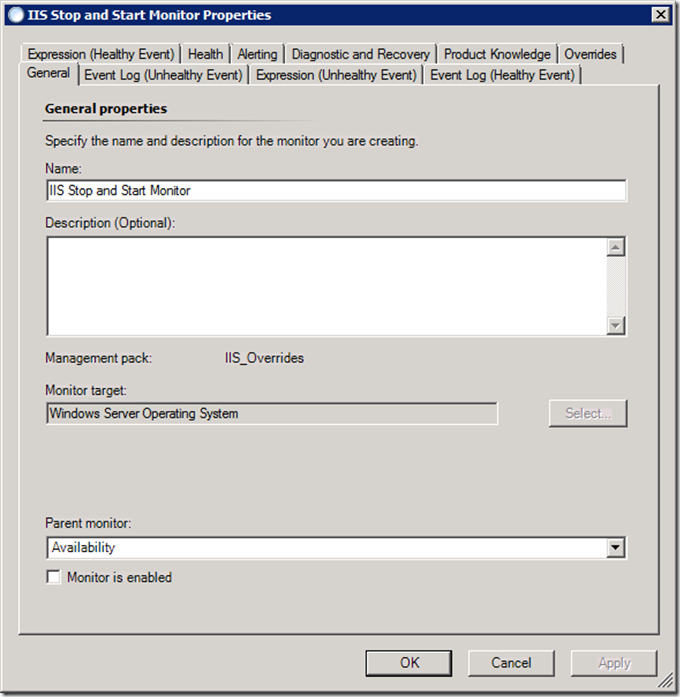 Created an override to enable to monitor for the IIS Computer Group to set the enabled value to true. 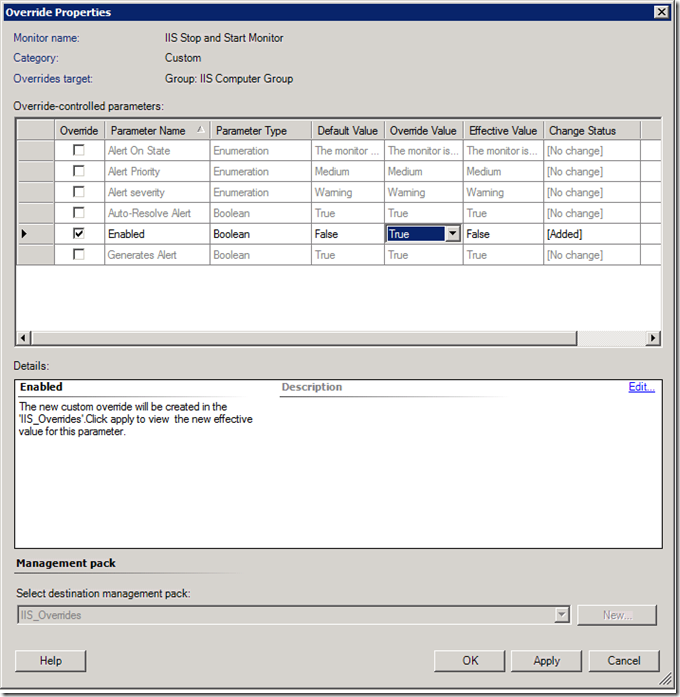 Summary: If you need, you can re-target rules within the OpsMgr Authoring console instead of deleting and re-creating the rules in the OpsMgr Console.