Why do organizations conduct employee performance reviews? This question has been pestering me for some time now.

We had implemented a comprehensive employee performance review process at Catapult Systems almost since day one. But why? When I started the company back in 1993, I just assumed that it was a necessary component of having employees. After all, I had always had performance reviews as an employee working for other companies, so I never really questioned their purpose or necessity.

And if you are going to do something, then you might as well do it right. So we took the best practices we could find from corporate America at the time and applied them to our company. We developed detailed performance plans for each job position at Catapult. We created a weighted rating system so that we could evaluate each competency and objective very granularly. As part of our annual review process, we implemented a thorough employee 360 feedback system where we collected performance data from everyone an employee had worked with during the preceding 12 months (including a self-appraisal); and we did this for every employee in the company, not just managers. This information was then provided to each performance manager so that they could complete a 10 page appraisal form for each person on their team, complete with competencies, objectives, and detailed comments.

Each appraisal included a final numeric score (ranging from 1.0 to 4.0) that was derived from the weighted ratings of each competency and objective in the review form (most forms had 40+ competencies and 3-7 objectives). And since we felt strongly about "fairness" at our company, we wanted to make sure that everyone was rated using a similar set of standards. After all, some managers might be more strict or lenient than others. So we asked every performance manager to come before a Review Committee and summarize the performance of each employee on their team. Based on their presentation, we would "normalize" that employee’s review score to fit into a nice company-wide bell curve. We called this process "Normalization Day", which actually took several days once we got over 100 employees. Finally, a separate Salary Review Committee would take all of this performance information, factor in market salary data, promotions, and few other items, and come up with a salary adjustment for each employee in the company.

Our annual performance review process would culminate with a one hour sit down meeting between the manager and the employee to review the appraisal form and discuss the employee’s overall performance. They would also agree on objectives for the following review period. We estimate that the total time investment in this process (filling out the 360 feedback forms, preparing the appraisal sheet, normalization, sit down meeting, etc.) was about 7 hours per employee. At 250 employees, the cost to our company in lost time alone was easily over $250K.

Does any of this sound familiar, or were we the only company that took this process this far…?! It gets even better. As a CEO and former software engineer, I am always looking for ways to optimize processes, so I decided to automate our employee performance reviews. In fact, I thought it was such a good idea at the time that I had our subsidiary, Inquisite (an enterprise software company we founded in 1997 and a world leader in online surveys, that we sold to Allegiance in 2009), develop a commercial version of this application called Inquisite Employee Appraisal Management (EAM).

Looking back at it now, I really don’t know what I was thinking. The best analogy I can use is that automating this antiquated performance review process was like paving over the old cobble stone roads of London: you get a nice, shiny, smooth surface, but you haven’t really solved your traffic problem because those old roads were never designed to accommodate today’s automobiles.

Our old employee performance management process had several critical flaws. First, the entire process was too time-consuming, and therefore the cost to the organization was too high. We had far too many competencies that we would measure our employee against, and our review form was too long and complicated. I can’t think of anyone in the company that actually enjoyed the process, and frankly most managers and employees dreaded it. Because we did this once a year, it often became an exercise in recollection for both managers and employees who struggled to remember everything that had happened during the previous 12 months. Our rating system and bell curve, which we took great care in applying fairly, was often demotivating for employees who were used to getting a 4.0 GPA back in school. In some cases, we would spend 15 minutes debating the difference between an A- or B+ on a single competency during the sit-down meeting with the employee. But the most critical flaw of our old process was that the feedback itself was too infrequent and too far removed from the actual behavior to have any measurable impact on employee performance.

And if you’re not going to impact employee performance (positive reinforcement or constructive feedback), what’s the point? In the end, the only reason I could think of to go through this laborious process was to gather enough data to justify a salary raise or promotion.

What if there was another way? I believe there is. In fact, I believe that we are at a unique crossroads in human history because of the worldwide phenomenon of social media. Social media is fundamentally changing the way people interact. Communication, idea-sharing, and feedback have become transparent and immediate. Applications like Facebook and Twitter allow people to interact in real-time, post comments and pictures for large audiences to consume, and often invite feedback from complete strangers. What if some of these concepts could supplement or completely replace a traditional performance review process?!

In November 2009, I decided to embark our company on a little social experiment. I decided to completely eliminate of our annual performance review process and replace it with a real-time performance feedback dashboard. We eliminated our 10 page review form, our 360 feedback process, Normalization Day, our rating scale, and our bell curve. All we’ve kept is our annual salary review and promotion cycle.

Now, each employee has a "performance home page" on our Intranet where anyone in the company (and any client) can post performance feedback (both positive and constructive) at any time. Each time a comment is posted, that person gets notified. Unlike Facebook and Twitter, only the employee and their manager (and HR of course) can see the performance data. 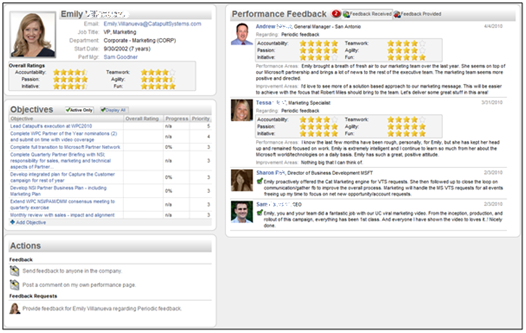 People can post performance feedback in one of two ways: event-driven or ad-hoc. Event-driven feedback is automatically requested based on certain "events" that occur naturally within our company. For example, each consultant is prompted for feedback on their coworkers at the end of every consulting engagement; each member of our accounting team is prompted for feedback at the end of each major accounting period; when someone teaches a training class internally, each attendee is prompted for feedback on the instructor at the end of the class; etc. Ad-hoc feedback can be provided by any employee (or client), for anyone in the company, at any time, and for any reason. If someone witnesses good behavior, then can take two minutes and provide a positive comment on that person’s performance page. If someone has a less-than-ideal experience with a coworker, they can provide real-time constructive feedback. I should point out that you do have the option to make your feedback viewable only to the employee’s manager if you feel that it might affect your relationship with that person. 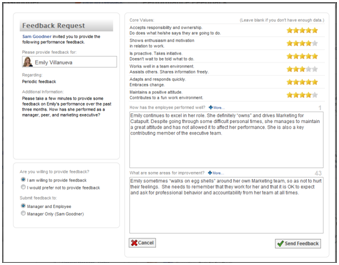 I learned another important lesson from social applications: less is more. Twitter, for example, restricts its users to 140 characters per micro-blog entry, and thus reduces "writer’s block" and makes it very easy for people to share their thoughts. So we decided keep our feedback form short and simple. We ask only two questions: "How has the employee performed well?" and "What are some areas for improvement?". Each question is limited to a 300 character response in order to keep the feedback short and to the point. Finally, people also have the ability to rate a person on our six Core Values (which is what we care about the most) using a simple five star rating system (similar to the one used on Netflix and Amazon to rate movies and books).

So far, our new social media inspired performance management process has been very well received by everyone in the company. The main advantage is that people are now getting immediate positive reinforcement (or constructive feedback), which is also encouraging a more regular dialogue between the employee and their manager about their performance. We still have our annual salary review and promotion cycle. But now, instead of the old grueling and time-consuming process of preparing those appraisal forms, the sum total of all of the "micro feedback" during the previous review period (which we keep in our system forever) becomes the employee’s performance document of record. Each manager can easily review all of the performance feedback for each employee to help them make their salary and promotion decisions.

Is this the next "big thing" in performance management?! I don’t know, but so far it’s working for us.