In a previous blog post I discussed the challenges which long commute times as a consultant and gave some options to minimize the impacts of long commutes. Based on this website link (http://project.wnyc.org/commute-times-us/embed.html) the average commute time America is currently at 25.4 minutes (check out your own zipcode to see what your average commute time is, mine shows 27.9 minutes). For additional reference URL’s for the topic of commute times in America see:

I’ve gotten some great feedback on this including some parts of the world that have even worse commute times than those we see in America! In many cases there may not be an “Optimal” commute time which is why this blog post has optimal in quotes.

As I mentioned at the end of that blog post, I’ve been working on an approach to map out and identify optimal commute times. This approach should work for anyone and only involves a little bit of time to gather the information to determine when optimal commute times are. To determine commute times with traffic I’ve worked with three different options mapping from Frisco Texas (the north side of the Dallas geography) to Fort Worth (the west side of the Dallas geography) for my example. The thee approaches I worked with were: BingMaps, GoogleMaps, and a mobile navigation application.

BingMaps: (http://maps.bing.com/) includes a variety of routes, and the estimated time in current traffic (highlighted below) 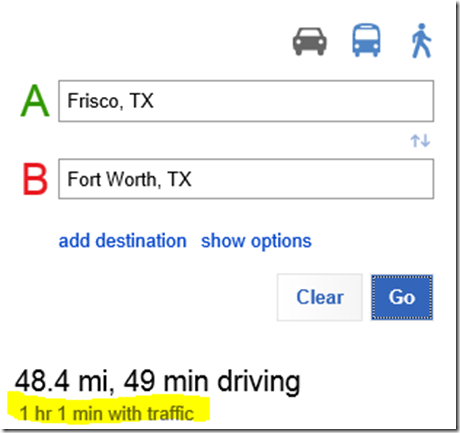 GoogleMaps: (http://maps.google.com/) includes a variety of routes, and the estimated time in current traffic (highlighted below) 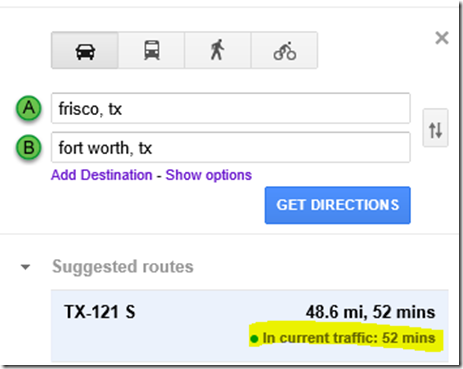 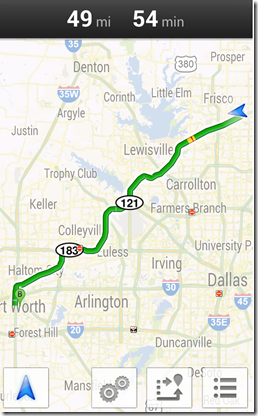 My preference: Of the three options, I personally prefer the Bing maps choice as it is quick to identify what the non-traffic drive time would be (49 minutes in the example above) and what the time would be with traffic (1 hour 1 minute with traffic in the example above). Bing also provides unique URL’s for the driving maps which are important when automating collection of this information.

Each of these options work well when identifying the current commute time based on traffic, but with a little creativity they can also be used to track and trend what these commute times look like over a period of time to identify an optimal commute timeframe. To identify commute times, we can manually access these web pages or check the phone based applications over the timeframe for the commute. As an example, if I will be on a client site the next day the day prior I can track what commute times look like from before until after rush hour traffic. An example of this is type of an analysis is shown below:

Commute to Frisco to Fort Worth:

Return commute from Fort Worth to Frisco:

How do I automate this?

As a next step on this I was looking for a way to provide a more automated method to gather this information. I ran across a utility called Site Shooter (http://www.nirsoft.net/utils/web_site_screenshot.html) which gathers screenshots from a URL that you provide. Since Bing maps provides a unique URL based on the starting point and destination point this provided a quick way to gather a screenshot on an every 15 minute basis for the commute time estimate. By saving these with a date and time format, unique screenshots can be created. As an example, if I’m routing from Frisco TX to Fort Worth TX, the URL for Bing is: http://www.bing.com/maps/#Y3A9MzMuMTUwNTU4fi05Ni44MjQwMTMmbHZsPTQmc3R5PXImcnRwPXBvcy4zMy4xNTA0OTBfLTk2LjgzNDY0MV9GcmlzY28lMkMlMjBUWF9fX2VffnBvcy4zMi43NTA5NTBfLTk3LjMzMDg1Nl9Gb3J0JTIwV29ydGglMkMlMjBUWF9fX2VfJm1vZGU9RCZydG9wPTB+MH4wfg== and the trip from Fort Worth TX to Frisco TX, the URL for Bing is: http://www.bing.com/maps/#Y3A9MzMuMTUwNTU4fi05Ni44MjQwMTMmbHZsPTQmc3R5PXImcnRwPXBvcy4zMi43NTA5NTBfLTk3LjMzMDg1Nl9Gb3J0JTIwV29ydGglMkMlMjBUWF9fX2VffnBvcy4zMy4xNTA0OTBfLTk2LjgzNDY0MV9GcmlzY28lMkMlMjBUWF9fX2VfJm1vZGU9RCZydG9wPTB+MH4wfg==

This unique URL can now be put into the Site Shooter application which can be configured to create unique screenshots on an every 5-15 minute basis. Using this approach, commute times can be captured regardless of where you are at as long as you have configured the application to gather the appropriate information (commute from location X to location Y) at the correct times of the day. 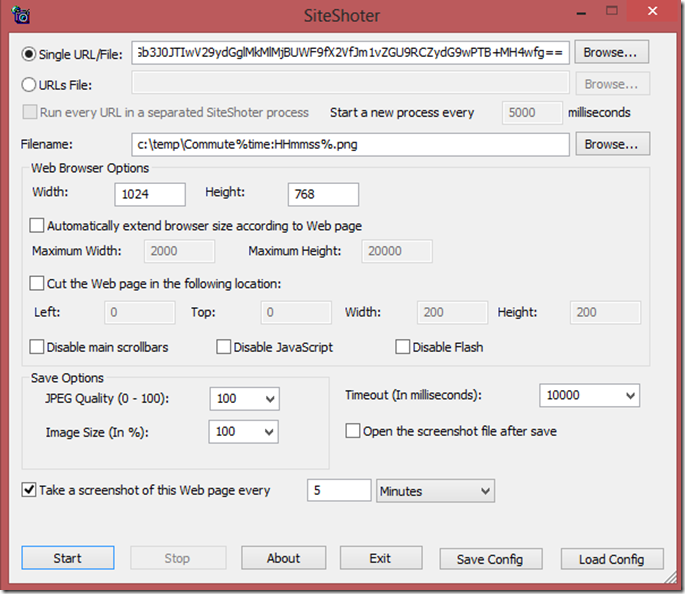 This will gather a series of screenshots which can be used to plug in the estimated commute time into the example Excel configuration shown earlier in this blog post.

Using this approach I was able to identify that the optimal commute times between these client locations were ? and ? on the way to client site and ? and ? on the return from the client site. The graphic below shows the charts created from the information gathered in Excel.

Commute to Frisco to Fort Worth: It is not surprising that the best commute times are early in the morning (6:00 am) or later in the day (9:30 am). However, it is interesting to note that the commute increase between 6:00 am and 7:30 am is not extremely significant (another 6 minutes). 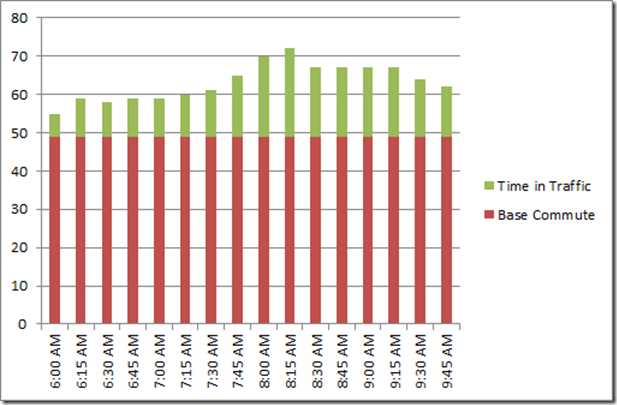 Return commute from Fort Worth to Frisco: It is also not surprising that the best return commute times are before 6:00 pm and after 7:00 pm but the increase in commute times between the peak timeframes and the rest of the driving time is not all that significant. 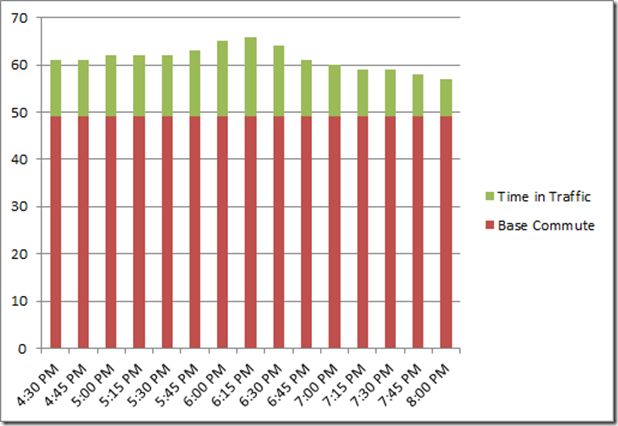 Summary: By tracking estimated commute times you can determine the best times to commute to and from your client site. By using the process I am using in this blog post, routes can be tracked during the day regardless of where you are at and can be used to identify your “Optimal” commute time which should result in less time sitting frustrated in traffic (or at least to have the knowledge that the commute wouldn’t be much better if I woke up several hours before dawn).

Technology Next Steps: What would be a great extension for these three types of applications would be to use previous traffic history and provide recommendations on commute timeframes based upon historical traffic patterns. Providing this functionality as part of the navigation and mapping sites would help drivers to identify optimal commute times and not just to know what the current commute time looks like.

Next blog post in the series! Stepping up your game as a consultant