Have OS deployment ask for a Computer Name

I found this on TechNet and had to work through it to make it work. I’ve added pics and better explanations on how to add and deploy the script to work for you. I found the scripts at this URL in TechNet. http://social.technet.microsoft.com/forums/en-US/configmgrosd/thread/5924e840-eb6e-48c1-858f-766a5be625a6/

This script will detect if the current assigned value for the computer name begins with MININT, indicating that this image is bare metal image.  It then prompts the end-user to enter a new computer name.  It is primarily useful for task sequences that do both bare metal and in-place reimages.

Steps to implement the script.

3. In the folder copy the VBS script to Notepad and save the file as “askcomputername.vbs”

4. Create an SCCM package that holds this script.  Do not create a program. Leave the program blank. Add the package to the appropriate DPs

6. For the task, give it the name you want.  (e.g. AskComputerName)

7. Select checkbox "Package" and then select the package created that has the script

8. In the command line section, put the name of vbscript…with the file extension! 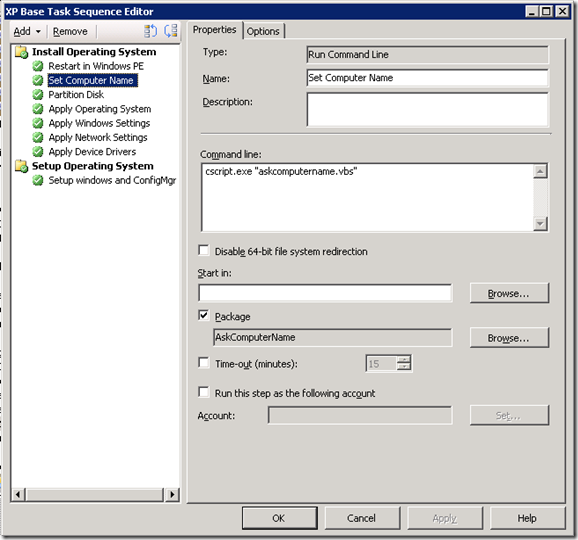 10. When deploying an image, you will see the following box asking for the computer name.