I have spent some time working with the Veeam management pack and recently started development of a NOC (Network Operations Center) dashboard which uses one of the Veeam widgets. The Veeam Traffic Light Widget allows you to show the top 20 or bottom 20 metrics and to color code them based upon the values which are displayed (to show yellow for warning levels, and red for critical levels). This widget is available if you have the Veeam management pack for Hyper-V.

NOTE: Between now and the end of the year, Veeam is providing a free product license (for up to 100 Hyper-V cores) for the Veeam Management Pack v7! Details on this program are available at http://go.veeam.com/mp-v7-free-enterprise-hyperv-license.html.

The screenshot below shows the dashboard which includes server down monitoring (state widget), computer health (state widget) and three key KPI’s using the Veeam Traffic Light Widget (High CPU Utilization, Low Disk Space, Low Memory Available). I prefer the Veeam Traffic Light Widget to the Objects by Performance widget because it lets you color code the values based on health. However, the same dashboard could have just as easily been created using the Objects by Performance widget for the middle three items in the graphic below.

One of the limitations of the Veeam Traffic Light Widget is that it is restricted in the user interface to displaying 20 metrics in the widget. For a small environment or a limited number of performance counters this may be just fine, but for larger environments it may be required to have more than 20 items displayed in the widget. I found that for this widget, if you change the underlying XML and re-import it you can change the maximum number of performance counters displayed within the widget. The XML for this is shown below:

The above XML alteration changes the maximum performance counters from 20 to 40 as shown in this example (see the Low Disk Space (%Free) widget which shows 39 counters displayed within it.

This same trick also works for the built-in Objects by Performance widget. The example below shows free disk space for 40 counters (instead of the default maximum of 20). 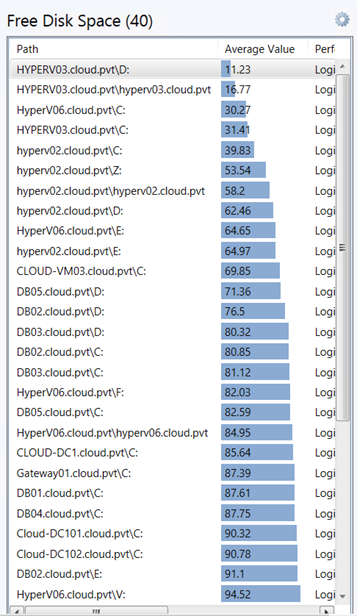 Forty does not appear to be an upper bound for this widget. The example below shows a total of 50 (which is most likely just the number of drivers I had available to display within this widget in my environment). 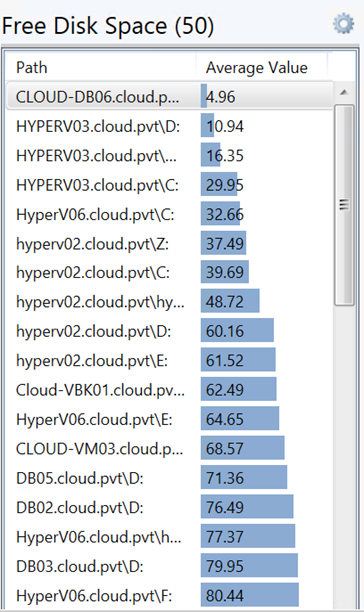 Be careful when changing this threshold as I am sure that the widget will perform more slowly when it is returning more than 20 values for the widget. From my testing I was only able to get this value to work up to 50, but that may have just been the limits of my lab and my testing. It is also important to note that if you edit the widget configuration in the Operations Manager console you lose the configuration of higher than 20 for this value.