Before proceeding with this step, it is assumed that proper planning has been performed (take advantage of the Exchange Server Deployment Assistant.). One of the most significant changes in Exchange 2010 is increased I/O efficiency. Just how much has I/O improved over previous versions of exchange? Over 90% more efficient than 2003 and more than 70% more efficient than Exchange 2007. According to the Exchange 2010 Unleashed book (an excellent resource) you can support up to 6,000 users on just six SATA hard disks!

“In older versions of Exchange Server, supporting 6,000 users required a fair amount of spindles on the disk subsystem. Exchange Server 2003, for example, recommended about 0.75 disk i/o per second per user. With a 6,000 user load, this mean about 4500 i/o per sec. Given that a typical 10,000 rpm disk can provide 110 i/o at an acceptable disk latency (under 20ms) it required 41 disks to provide this level of performance [double to 82 disks for redundancy in a RAID 0+1 configuration]… In Exchange 2010, the i/o requirement is more like 0.1 i/o per sec per user, due to the large transfer block size and the amount of data that is cached [64-bit architecture]. In this scenario, the same 6,000 users would require 600 i/o per sec, which could be provided by 6 spindles.” [Comments in brackets are mine].

In the planning process, I found that the version of Blackberry Enterprise Server that we have does not support Exchange 2010, but it is fully supported on BES 5.0.1 (MR1) and Exchange 2010 Update Rollup 1. Also, on February 16th, Blackberry announced a free version of Blackberry Enterprise Server, called Express, that can support up to 2,000 users. This product is available for download on March 2nd here.

Another consideration is our DPM 2007 server would need to be upgraded to DPM 2010 Beta.

Organizations that previously enjoyed Inbound Fax with Exchange 2007 UM will need purchase a 3rd party fax product since inbound fax has been removed from Exchange 2010. Read more about that announcement here.

ALL of our Exchange 2007 servers would need to be upgraded to SP2. I blogged about that in the first part of this blog series. At the time of this writing Update Rollup 2 was available for 2007 SP2. SP2 should be approached with careful planning because of the extensive schema changes that happen with Active Directory during an SP2 installation. Fortunately, these changes are rolled up into the setup process and so you do not need to run separate command line tools to extend the schema. Running setup with a user in the Schema Admins group is required.

We use the Unified Messaging role within Exchange 2007, so care would have to be taken to migrate this to 2010 without impacting voicemail.

Also, there is no support for an in-place upgrade of Exchange 2003 or 2007 server to 2010, so new hardware needed to be purchased. Like 2007, 2010 requires a 64-bit operating system. If you plan on taking advantage of the new Database Availability Group (DAG) then make sure you install on the Enterprise version of Windows Server.

Since Update Rollup 1 for Exchange 2010 is already available, it is possible to copy it to the Updates folder in the Installation Directory so that it is slipstreamed and decrease the amount of time that the installation process takes.

The order of installation is to go with the Internet facing CAS role first. Here are the steps that I followed:

1. Install Prerequisites. For our CAS Server, it was the following powershell command:
Add-WindowsFeature NET-Framework,RSAT-ADDS,Web-Server,Web-Basic-Auth,Web-Windows-Auth,Web-Metabase,Web-Net-Ext,Web-Lgcy-Mgmt-Console,WAS-Process-Model,RSAT-Web-Server,Web-ISAPI-Ext,Web-Digest-Auth,Web-Dyn-Compression,NET-HTTP-Activation,RPC-Over-HTTP-Proxy -Restart 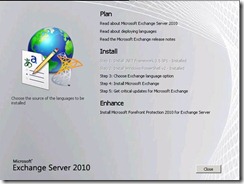 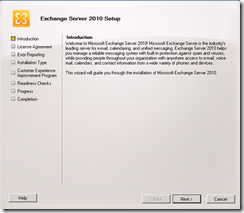 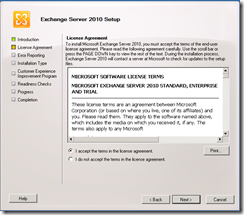 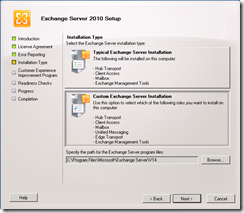 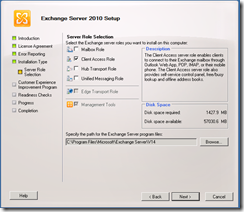 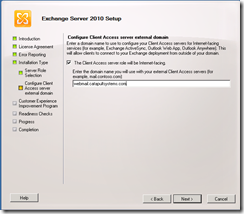 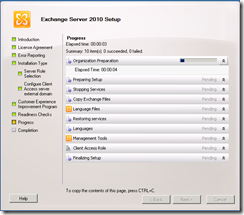 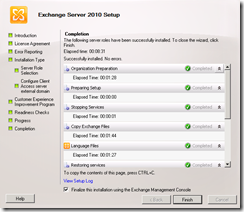 The next step is to Enter Product Key because you’ll be nagged for 120 days to do so.

One surprise that happened was this error message “An IIS directory entry couldn’t be created. The error message is Access is denied. HResult = –2147024891 It was running the command ‘Get-OwaVirtualDirectory.’.

Turns out, if there is any Exchange 2007 servers in co-existence with Exchange 2010, the security group “Exchange Trusted Subsystem” needs to be a member of Local Administrators group on each Exchange Server 2007 box. Thanks to the Exchange Geek for this documenting this.

You can now browse to the Outlook Web App page:

If this is an internet-facing CAS server you can now proceed with requesting and assigning the UC SAN certificate. This is documented in detail in the previous blog post in this series.

In the next part of the blog series, we will document the process for installing the Hub/Transport and Mailbox role. Because our organization is fairly small [250 users] I will combine these two roles on a single server, with the intention of adding a redundant server in a Database Availability Group (DAG) in the near future.