Then you typically have another Management Server for the Windows Clients to report and yet another for Unix/Linux clients along with Network Devices.

This design works well; however, there is one fatal flaw. If you are integrating OpsMgr with VMM; this means that now you have to install SQL Server Analysis Services on the RMSe Management Server. For this intergration to work, you must install SQL Analysis Services where you have Operations Manager Reporting. And Operations Manager Reporting must be installed on the same server as you have SQL Server Reporting installed. That is a lot of additional overhead for the RMSe server. Not that’s it a big deal, just something to keep in mind.

Anyways, to move Operations Manager Reporting to a dedicated SQL server is pretty easy, just do the following:

If you have custom reports you will have to deal with them also to move them. And don’t forget to make backups.

If you don’t do this, you will need to install SQL Server Analysis Services on your Operations Manager Server if you have SQL Reporting Services installed there. In an all-in-one configuration, you have to install SSAS on the Management Server

Per the SC 2012 SP1 VMM documentation (download here http://www.microsoft.com/en-us/download/details.aspx?id=6346) on pg 537 of the word document, it states the following:

So this leads one to believe that if you are using SQL 2012 or SQL 2012 SP1 to integrate Operations Manager with VMM and that you need to use SQL Analysis Services Analysis Management Objects for the version of SQL you are using.

You also need to add whatever account you are using for the SQL Analysis Services integration, I like to use my VMM RunAs account into the Operations Manager Report Security Administrators User Role properties. 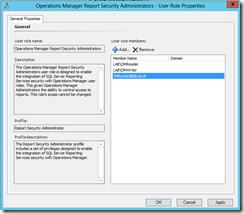 Ok, simple enough… I add my SSAS install location into in the Operations Manager integration in the VMM console. 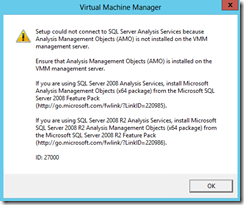 For this integration to work, you must use SQL 2008 R2 Analysis Management Objects! Not SQL 2012 SP1 AMO, does not matter if you installed SQL 2012 SP1 Analysis Services or if VMM is using SQL 2012 SP1! Now this is for VMM SP1 UR2. Maybe it will be fixed in future releases.

Ya, that one got me too, but thanks some pointers by Hyper-V/VMM expert and MVP Damian Flynn (http://www.damianflynn.com), I got this one squared away! 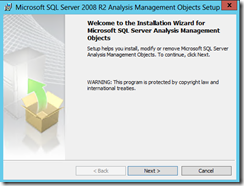 Next, Accept the License, Next, Blah Blah Blah 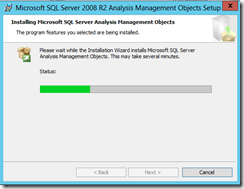 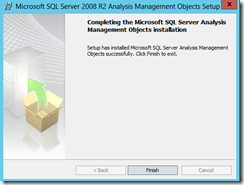 After VMM restarts, go through the setup again. If you are using Windows Firewall, don’t forget to allow SSAS port 0 or what ever you are using through. 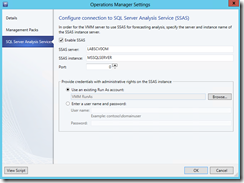 Your done. Headache over! WooHoo! 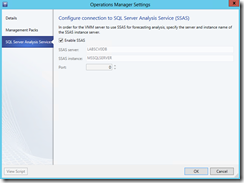 Its a lot of work for the reports but remember, you are also installing components into SSAS that can be used for other things. Anyways, a happy VMM environment is a happy OpsMgr Environment too! Until next time!