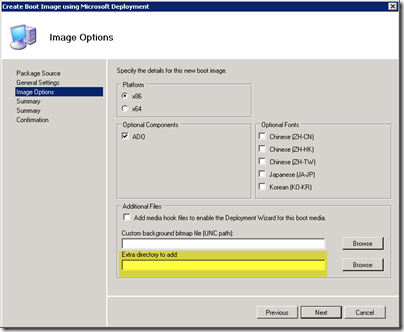 About the only method for troubleshooting issues in OSD is to drop to a command-prompt (by pressing F8) and then running whatever tool you need; e.g., Trace32. The only real problem with this method is making whatever tools you need available to you. This is typically done by adding the tools directly to the boot image. MDT makes this much easier for you in the MDT Boot Image creation wizard (shown at the right) and the method outlined Michael Petersen makes this easier for standard boot images. However, once the boot image is created, there is no good way besides manually mounting the WIM and modifying it or of course recreating the boot image. Both of which, while not huge challenges or time wasters, are just annoying. Also, putting these tools in the boot image does not make them available after the Setup Windows and ConfigMgr task; i.e., when the TS is actually running in the deployed OS. And what happens if you are using boot media: then the fun really begins.

There is a simple solution to this though. Put any tools you want available in a folder accessible via a UNC and add one (or multiple) Connect to Network Folder tasks in the task sequence to connect to this UNC – the mappings do not survive a reboot so you’ll probably need at least two: one for the PE portion of the TS and one for the OS portion. Now, whenever you need the tools, simply drop to a command-prompt and change drives to whatever drive letter you chose. You can add tools on the fly and even copy log files back up to the folder if you’ve set the permissions correctly. If you don’t trust the folks troubleshooting the TS from monkeying with the tools in the first folder you can create a second folder for copying logs and a second set of Connect to Network Folder tasks to connect to the logs folder.

The Connect to Network Folder task has no impact on the running TS or the resulting OS deployment so there is no harm in adding these in. They offer a fast and flexible way to get to your troubleshooting tools without having to modify your boot images. 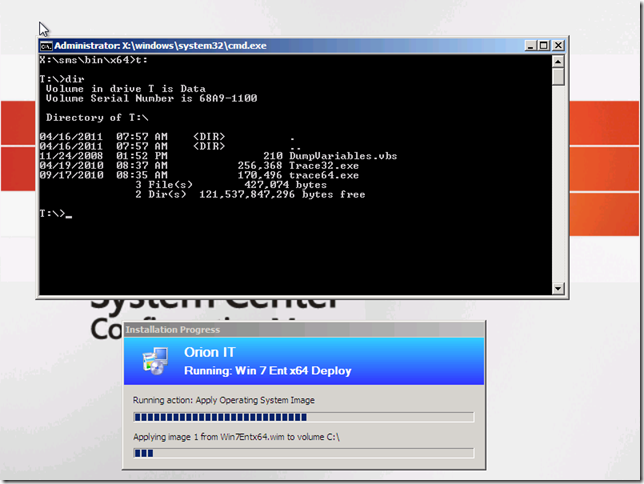